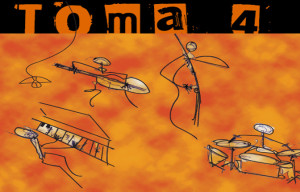 TOMA 4 begins in 2006 in Barcelona, Spain, when 4 musicians from different places of the world (Barcelona, Tenerife, Bogotá and Buenos Aires) get together to explore their influences and, by doing so, the mix of their respective cultures. With an original repertory, interpreted in contemporary jazz key and based in the improvisation, they rely in collective work and arrangements of their own compositions. TOMA 4 presents their first album release, entitled “TOMA 4”, edited by Fresh Sound New Talent.